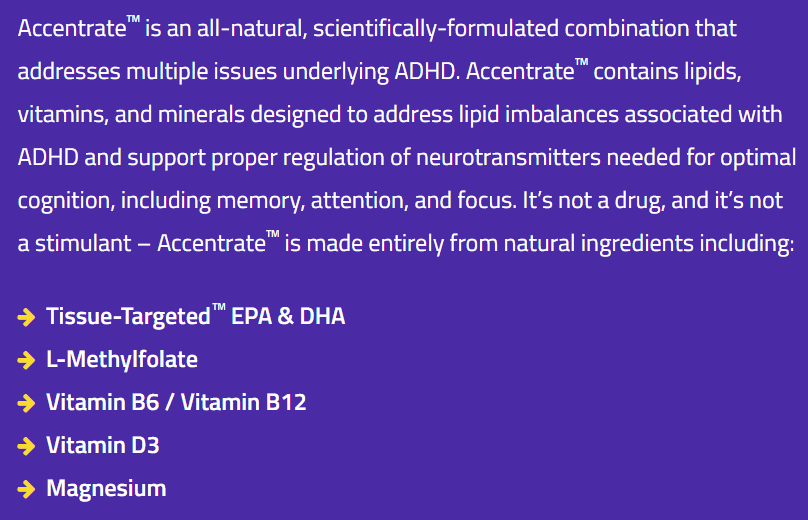 Social media was lit up the weekend Vayarin was discountinued. Parents, people with ADHD, and medical practitioners frantically looked for alternatives. Many opined that they could simply buy
EPA and DHA from fish oil and alternative sources of
Phosphatidylserine (PS) and … presto…you have an alternative to Vayarin. But is this really the case? NO

Vayarin was comprised of the omega-3 fatty acids EPA and DHA conjugated to phosphatidylserine which was marketed to address lipid imbalances associated with ADHD.

Let’s break that down, what does that mean?

EPA and DHA are important long chain fatty acids that are prevalent in the brain. They are polyunsaturated fatty acids (PUFA), which means they are big and take up space. They increase cell membrane fluidity in the brain, which helps cell signaling. It has been reported that people with ADHD are deficient in EPA and DHA. The body cannot synthesize EPA or DHA on its own, which is why people use supplements to increase the amount of EPA and DHA in the body.

Phosphatidylserine (PS) is a naturally occurring membrane phospholipid that is found in high concentrations in brain tissue, where it comprises 10–20% of the total phospholipid pool. PS plays a critical role in activating important signal transduction pathways and modulating neurotransmitter release and receptor function. These signal transduction pathways are more utilized when PS is conjugated to DHA and EPA. PS alone, does not have this function.

Can you buy any other PS that’s conjugated to EPA and DHA? That’s unlikely as VAYA Pharma patented this compound. So what else is there?

Accentrate – Tissue Targeted EPA and DHA which is specifically formulated to be brain ready nutrition.

Why We Say to Give Accentrate™ 90 DAYS

February 11, 2020
Close Menu
By pressing continue you acknowledge that you are signing up for an Auto Ship service. This means Fenix Health Science, LLC, the makers of Accentrate (TM) ,will automatically charge your card on the day it is scheduled to renew. All changes or cancellations must be made prior to the renewal date.
Cancel Continue
×
×