Accentrate® contains omega-3 fatty acids, which address lipid imbalances associated with ADHD, as well as vitamins and minerals, which the body uses to support proper regulation of neurotransmitters needed for optimal cognition, including memory, attention, and focus. 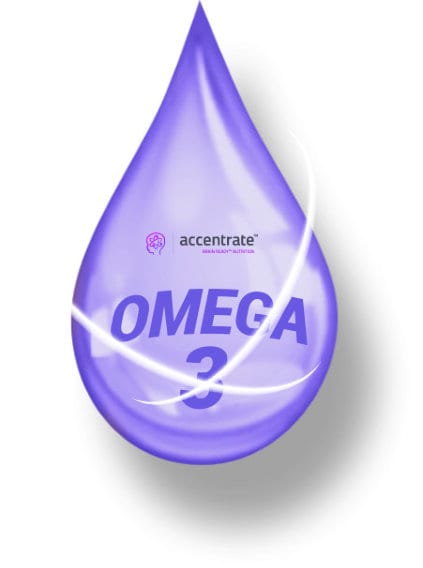 The research behind lipid imbalances

The u-3 polyunsaturated fatty acid (PUFA) docosahexaenoic acid (DHA) and, to a lesser extent, the u-6 PUFA arachidonic acid (AA) constitute a large proportion of the lipid in the brain. The u-3 PUFAs DHA and eicosapentaenoic acid (EPA) are involved in many aspects of brain function including cell growth, neural signaling, and gene expression.[1]

Omega-3 PUFAs are thought to play an important role in cell membrane elasticity and myelination and may thus affect neural signal transduction. Animal studies indicated that omega-3 PUFA deficiency, and specifically DHA deficiency, results in decreased neuron size in rats that were raised on a DHA-deficient diet. Furthermore, both dopaminergic and serotonergic neurotransmission have been shown to be reduced in rats on an omega-3 PUFA-deficient diet, with marked effects in the frontal cortex.[2]

More specifically, lower frontal cortical omega-3 PUFA status correlated with hyperactive and impulsive behavior in rats. Interestingly enough, a vast body of human literature has implied neurotransmitter dysfunction and impairments in cognitive control for those suffering from ADHD. With all this in mind, this may suggest a potential target for omega-3 supplementation in the treatment of this disorder. [3]

It’s also been shown that people diagnosed with ADHD are more likely to have low levels of certain lipids, specifically certain omega-3 fatty acids. ADHD has been shown to be associated with metabolic disturbances in lipid metabolism[4]. The imbalances in lipid metabolism that may occur in ADHD are associated with increased oxidative stress, higher rates of lipid degradation, and decreased synthesis of phospholipids containing omega-3 fatty acids. Reduced levels of phospholipid-EPA and phospholipid-DHA affect membrane structure and function.

Signal transduction and receptor signaling are major membrane functions which may be influenced by membrane stability and fluidity. Lower concentration of omega-3 LCPUFA in neuronal tissue has been speculated to lead to lower serotonin levels at critical periods of neurodevelopment and may result in a cascade of suboptimal development of neurotransmitter systems limiting regulation of the limbic system by the frontal cortex, thus explaining the association to oppositional behavior.” [5]

Accentrate® was specifically formulated to include ingredients backed by scientific research

Accentrate® contains premium ingredients that are not often found in an over-the-counter multivitamin. The ingredients are the active, bioavailable forms that cross the blood-brain barrier, which is why we call it Brain Ready® Nutrition. Each ingredient is also backed by the scientific literature.

It has been reported that “single-nutrient studies [of ADHD] have yielded only modest findings, whereas broader interventions may be more promising… A consideration of some of the ingredients and the role they play in brain metabolism highlights the importance of the broad array of nutrients and may help explain the non-specific effects the nutrients appear to have on psychiatric symptoms.”

Tissue-Targeted® EPA and DHA are omega-3 fatty acids conjugated to a phospholipid (PL).

EPA and DHA in this form, unlike fish oil, readily bypass the blood brain barrier and are absorbed by brain tissue through Lyso-phosphatidylcholine.

It has been reported that the developmental difficulties associated with ADHD have a neurological basis and might be related to low levels of omega-3 polyunsaturated fatty acids (PUFA),  and some evidence reports that children with ADHD and dyslexia may show improvements in symptoms following supplementations with omega-3 fatty acids.

It has also been suggested that “increased u-3 PUFA intake can improve attention, literacy, and behavior problems in some children with ADHD.”

These statements have not been evaluated by the Food and Drug Administration (FDA). This product is not intended to diagnose, treat, cure, or prevent any disease.

Folates have been reported to be of fundamental importance in brain growth, differentiation, development, repair, mood, cognition, ageing, and methylation. Impaired methylation of dopamine receptors and membrane phospholipids can contribute to problems in firing of neurons and subsequently to attention disorders.

“Vitamin B6 (pyridoxal 5’-phosphate) acts as a cofactor for the synthesis of gamma-aminobutyric acid, serotonin and dopamine.”  It has been reported that administration of Vitamin B6, Vitamin B12, and folate “might contribute to the positive effects … given their role in the regulation of homocysteine metabolism, mood, and neurotransmitter synthesis.

Vitamin D3 regulates serotonin. An underlying mechanism has been reported that describes how Vitamin D3 hormone appears to control 900 genes and is a key regulator of brain serotonin synthesis.

It has been reported that Vitamin D3 supplementation has been shown to improve inattention, hyperactivity, and impulsivity in children and adults with ADHD.

These statements have not been evaluated by the Food and Drug Administration (FDA). This product is not intended to diagnose, treat, cure, or prevent any disease.

We are so pleased with this product! It has really helped my son!
Alissa - August 2020
I do want to provide feedback regarding the use of Accentrate 110 for my 14 year old son. This dietary supplement has helped me son be able to work with his ADHA inattentive and not need any forms of medications. The supplement has helped my son be able to do his studies and perform his best as he continues to be on the Honor Roll. This support also made it possible to stop the other trial medication that was being prescribed that had awful side effects. I am glad I am able to purchase this supplement and support my son with his learning abilities and daily optimal functions.
Veronica - October 2020
I am so thankful for this product. We were using Vyarin and then they stopped shipping to the US. This product works the same as the other one. We are so thankful because it has been life changing for our son.
Tammy - August 2020
More Testimonials

Join over a hundred other practitioners helping their patients manage ADHD

Contact Us
Close Menu
By pressing continue you acknowledge that you are signing up for an Auto Ship service. This means Fenix Health Science, LLC, the makers of Accentrate (TM) ,will automatically charge your card on the day it is scheduled to renew. All changes or cancellations must be made prior to the renewal date.
Cancel Continue
×
×