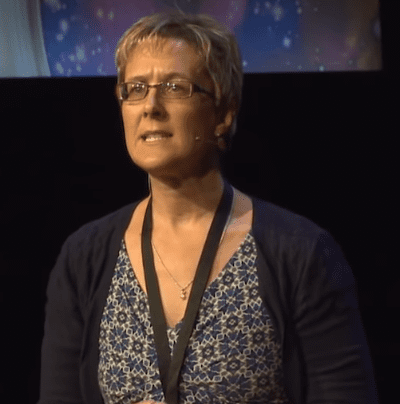 Is there another way forward? Almost two decades ago, my Ph.D. supervisor at the time, Professor Bonnie Kaplan, told me about some families who were treating themselves with nutrients in southern Alberta, Canada. Now they had bipolar disorder psychosis, depression — these are serious conditions. And my education in clinical psychology had taught me that nutrition and diet were of trivial significance for mental health and that only drugs with psychotherapy could treat these serious conditions.

In 2009 I received some funding to run a randomized placebo controlled trial, using minerals and vitamins, also known collectively as micronutrients for the treatment of ADHD in adults. And this study was published in the British Journal of Psychiatry in April of this year. And here’s what we found.

And one year later, those people who stayed on the micronutrients maintained their changes or showed further improvement and those who switched to medications or stopped the micronutrients actually showed a worsening of their symptoms.

Now I need to tell you something here. And that is when I say micronutrients, I’m actually referring to a dose higher than what you’d get out of a vitamin pill purchased in the supermarket. We — in this study we gave participants up to fifteen pills a day with 36 nutrients. So it would be unlikely that if you went and got in over the counter supplement, you would unlikely see these positive benefits, both because the dose is lower and the breadth of nutrients is lower.

Now these positive benefits are not confined to a single study. My lab at the University of Canterbury is a mental health and nutrition research group. And we’ve published over 20 papers in medical journals, all documenting the benefits of micronutrients. For example, this study here showed that we could reduce the symptoms of bipolar disorder in children by 50% with a simultaneous reduction in medication.

This study here showed that we could reduce rates of probable post-traumatic stress disorder from 65% , down to 18% following the Christchurch earthquake with a one month intervention of micronutrients with no change than those not taking the nutrients. Even one year later, those people who had received the nutrients were doing better than those who didn’t. And we’ve just replicated these findings in collaboration with researchers at the University of Calgary following the floods of June 2013 in Alberta, Canada.

To me the message is clear that a well nourished body and brain is better able to withstand ongoing stress and recover from illness. Giving micronutrients in appropriate doses can be an effective and inexpensive public health intervention to improve the mental health of a population following an environmental catastrophe.

In my 20-year career I have rarely seen these dramatic responses from conventional treatments. When people get well, they get well across the board, not only in the symptoms that we treated but also in other areas like improved sleep, stabilization of mood, reduction in anxiety and the reduction in need for cigarettes, cannabis and alcohol.

My research and those around the world have shown that 60% to 80% of people respond to micronutrients, showing just how powerful this intervention is. And internationally, there have now been 20 randomized placebo controlled trials. This is the gold standard that we use to make clinical decisions, showing that we can reduce aggression in prisoners, slow cognitive decline in the elderly, treat depression, anxiety, stress, autism and ADHD. And they might even be more cost effective than current conventional treatments.

This study here documented the treatment of a 10-year old boy with psychosis. When his six-month inpatient treatment with medications was unsuccessful, he was treated with micronutrients. Not only did the micronutrients completely eliminate his hallucinations and delusions, changes that were maintained six years later but the cost of the treatment was less than 2% than the cost of the unsuccessful inpatient treatment. The cost savings alone make it imperative that our society pay attention to the wider benefits of this approach.

And there is more good news. Treating, supplementing before mental illness emerges can actually stop these problems from developing in the first place. This fantastic study looked at 81 adolescents at risk for psychosis and randomized them to receive either omega-3 fatty acids in the form of fish oil — essential nutrients for brain health — or placebo for a 12-week period. One year later, 5% of those who received the fish oil had converted to psychosis versus 28% of those on placebo. That represents an 80% reduction in the chances of you getting converting to psychosis simply through giving fish oil.

But even in the last five years there have been 11 epidemiological studies crosssectionally and longitudinally in large populations around the world, all showing the same thing. The more you eat a prudent or Mediterranean or unprocessed type of diet, the lower your risk for depression. And the more you eat the Western diet or processed food, the higher your risk for depression. I know of only one study that has not found this association and not a single study shows that the Western diet is good for our mental health.

What is the Western diet? Well, it’s one that is heavily processed, high in refined grains, sugary drinks, takeaways and low in fresh produce. And a healthy diet is one that is fresh, high in fruits and vegetables, high in fish, not healthy fats, and low in processed foods — what your grandmother would recognize as food.

There are still many questions remaining about the relationship between mental health and nutrition. What role does genetics play in determining who’s going to respond to nutrients and who needs additional nutrients and they can get out of their diet? What role does an infected inflamed gut play in the absorption of nutrients? It’s not we are what we eat, it’s what we are what we absorb. And what role do medications play in determining how effective the nutrients are? Combining medications and nutrients is actually complicated. And we need more research in better understanding these interactions.

Learn about the risks of cheap processed foods. As Michael Pollan stated cheap food is an illusion. There is no such thing as cheap food. The price is paid somewhere. And if it’s not paid at the cash register, then it’s charged to the environment and to the public purse in the form of subsidies and it’s charged to your health. All children need to learn how to cook. All children need to know that food doesn’t have to come in a packet. Schools could reflect on the content of their lunch menus.

Children are too frequently rewarded with processed foods for good behavior. We need to reflect on whether or not this caring intuitively makes sense. Ultimately we have a responsibility to teach them that every time they put something in their mouth, they make a choice to eat something nourishing or something nutritionally depleted.

Tips on teaching a child to swallow a pill

A Mom’s Review of Accentrate

June 3, 2019
Close Menu
By pressing continue you acknowledge that you are signing up for an Auto Ship service. This means Fenix Health Science, LLC, the makers of Accentrate (TM) ,will automatically charge your card on the day it is scheduled to renew. All changes or cancellations must be made prior to the renewal date.
Cancel Continue
×
×